Cubeworks is a game that just wouldn’t work if it wasn’t for VR.  I mean, sure, you COULD probably make this game for those flat users (we’ll call them flusers) but the mechanics here wouldn’t translate very well to TV screens.  Your purpose in CubeWorks is simple.  Catch or grab blocks in a variety of levels and match their symbols to chain together larger combos without losing, dropping or destroying the blocks.  It’s actually a very simple premise that relies on your own speed, reflexes and planning to get to the top of the leaderboards. 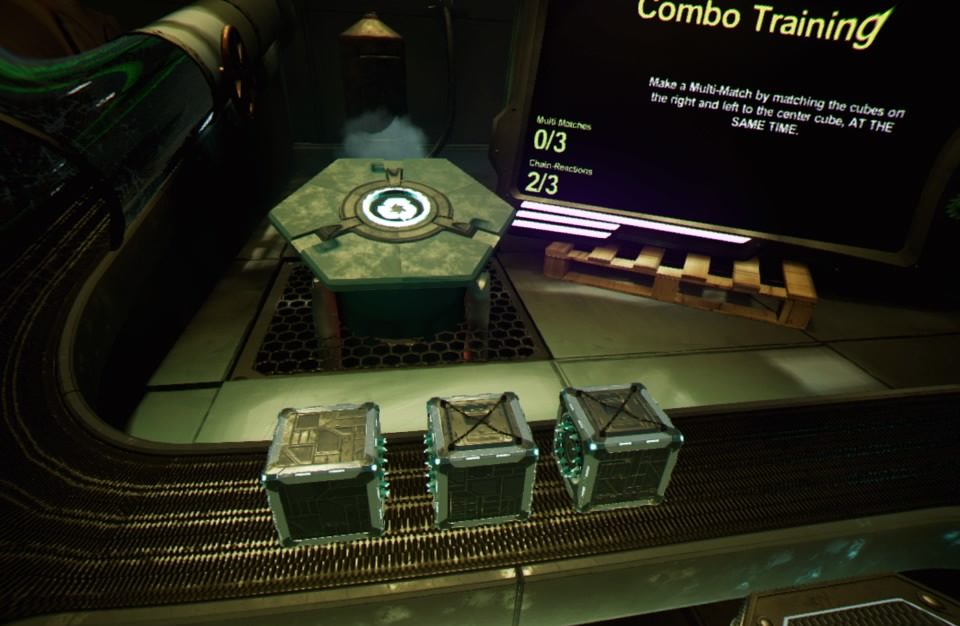 I advise you to play through all the tutorial missions

The controls here are fairly simple with each hand mapped to an in-game Move controller w/ a laser pointer.  Pointing at any block will draw it to your hand whereupon you need to match one of it’s sides with a matching side on another block.  When you join the blocks together they stay locked in place in the air for a few seconds, allowing you to add more blocks to the locked ones, dramatically increasing your score though I found chaining more than 3 blocks to be a near impossible task.  While holding a block and pressing the Move button you can spin the blocks in place which is a tough skill to master.  Each stage has set scores to beat or times to get a certain amount of points and it all boils down to just how fast you can place blocks together without losing any.  There is an option to raise or lower some little tables to either side of you to better organize the blocks you haven’t been able to use yet.

Abilities are also available when you recycle old parts.  To do so you simply grab those useless pieces of scraps and toss them into a nearby furnace disposal chute.  Once you do that you get a special block that, when combined with a matching block unlocks 1 of a few abilities like slo-mo mode or magnet mode where the pieces automatically line up saving you some work.  These additional powers mix up the gameplay nicely and could save you from a dire predicament as the pressure builds.

There are 5 stages with 5 levels each (roughly) offered here and each carries not only a different look from the others, but also delivers the blocks to you in a new way.  One stage has blocks being tossed left to right in front of you while others have blocks on conveyor belts that could be in front or on either side of you.  The stages are actually different areas of a warehouse and use a lot of darker browns and yellows which isn’t to bad though on a few stages the limitations on the draw distance in combination with the color scheme used had me unable to tell which symbols were on blocks until they were closer to me.  Besides that one issue, I enjoyed the visual style here and it fit nicely with the gameplay. 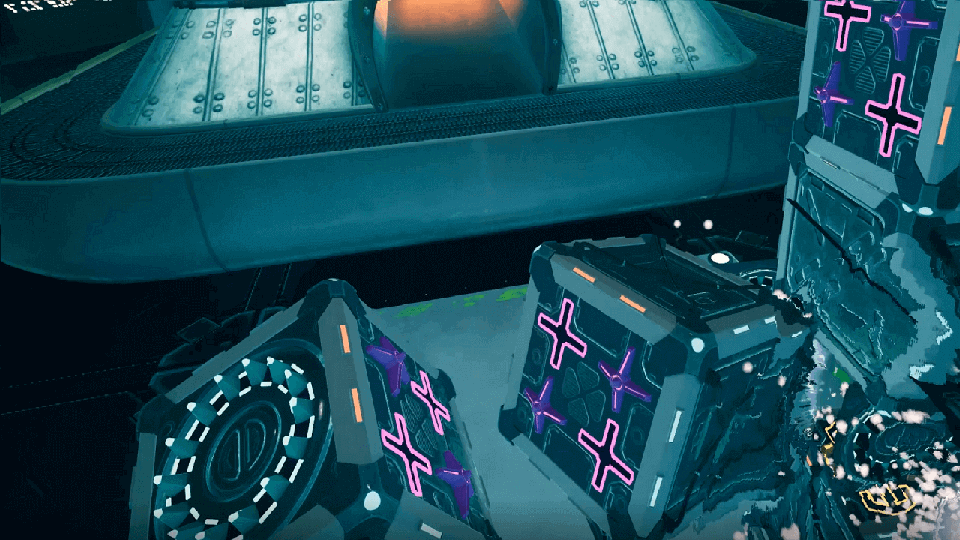 Handle your business lest the cubes pile high!

I love the soundtrack here as it’s a blend of house and electronic ala Tron Legacy and I’m an absolute sucker for this style of music in video games.  It gets you pumped and in the mood to grab these blocks and smash em together as fast as possible.  The sound effects also stand out as being of a higher quality for a budget title with environmental sounds like machines and other moving parts all providing a very immersive atmosphere.

Cubeworks does have a few issues, the most glaring one being repetition.  Only after a few minutes I was begining to feel fatigued on the gameplay here.  In no way was I pro and I failed way more than I succeeded but I just didn’t have that drive to get better.  I’m not saying the gameplay is terrible, quite the opposite in fact, I’m just saying that it may best to play this in smaller doses.  My second issue is that when you successfully join 2 blocks together, they freeze in the air wherever you joined them, blocking your view of the action in that direction.  It’s not the largest issue, but when it does happen, it’s a little annoying and the ability to still hold on those blocks feels missed.  Lastly is the difficulty level of some of these challenges.  It’s easy enough to match up 2 blocks, but trying to chain together multiple blocks is a pain without powerups.  Be forewarned, this game gets really hard. 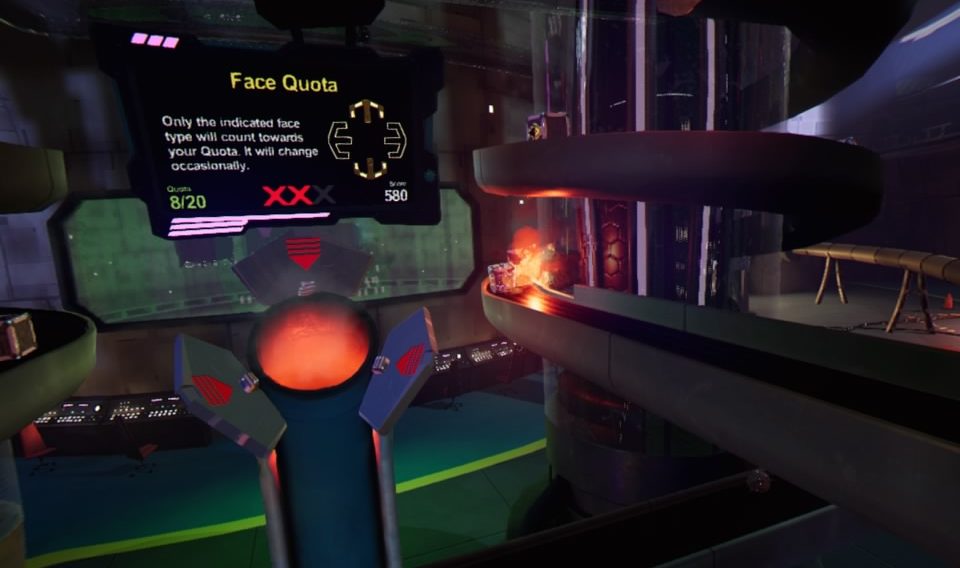 I like what Tin Moon Studios has done here.  This is small physics based puzzle game that definitely pushes your micro-managing skills and reflexes.  None of the stages are locked and all you need to do is play one stage to unlock the next, regardless of whether you meet that stages goal or not.  I love games that don’t cut off content because I may just not be good at it.  The intense beats of the soundtrack will get you in the mood for whatever comes your way and while repetition does rear it’s ugly head sooner than later, there is no punishment for just taking a break and coming back for a round or 2 the next day.

What would I pay?  The $10 asking price for this is perfectly fine.  There is enough content to keep you entertained for a few minutes or a few hours.  Cubeworks works best as a quick pickup-and-play type game that easy to play, but difficult to master.

TinMoon Studios provided The VR Grid with a review code for this title and, regardless of this review, we thank them for that!