Prepare for a whacky puzzler as you help complete some insane machines designed for some very mundane purposes.  In the role of an eccentric professor, a strange package has been delivered to you and upon revealing its contents you are taken on a journey across realms as you unravel the mysteries behind your new gift. 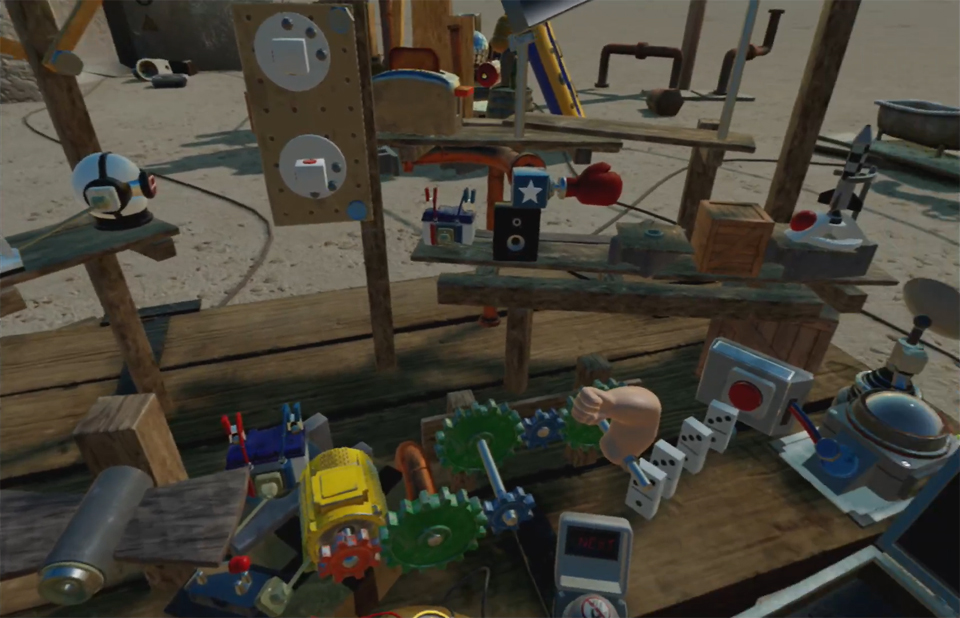 Every machine is very, very complicated!

The entirety of this game takes place in front tabletops with overly elaborate machines laid out before you.  The machines perform the simplest of actions, from opening a package, turning on a magnet or just pressing a button to activate another nearby machine, but unfortunately, they are always missing vital components.  That’s where you come in.  Each stage places you in front of the machine with the missing components to right in a briefcase and you need to place them in the correct locations to make this contraption work.  Each piece has a small marker on it and can be placed on similar markers scattered around the machine in empty spots, making them easy to find.  From here you just need to press the start button to make the machine do its thing and when the machine hits a missing obstacle, put the right piece in that spot until you get everything to work.  You can’t place anything that collides with geometry making it a little easier to narrow down what goes where and as you play through the game, you’ll get familiar with the more common items you’ll be using, though new items are constantly introduced throughout the 40-stage campaign.  There is little robotic assistant who can show you exactly where pieces are supposed to go, though makes fun of you every time you use its services.  Initially, the puzzles are mundane and simple though after a few stages things get a little interesting as there will be more spaces on the board then you  have pieces or the exact opposite with you having more pieces then you need which can lead you to incorrect solutions. 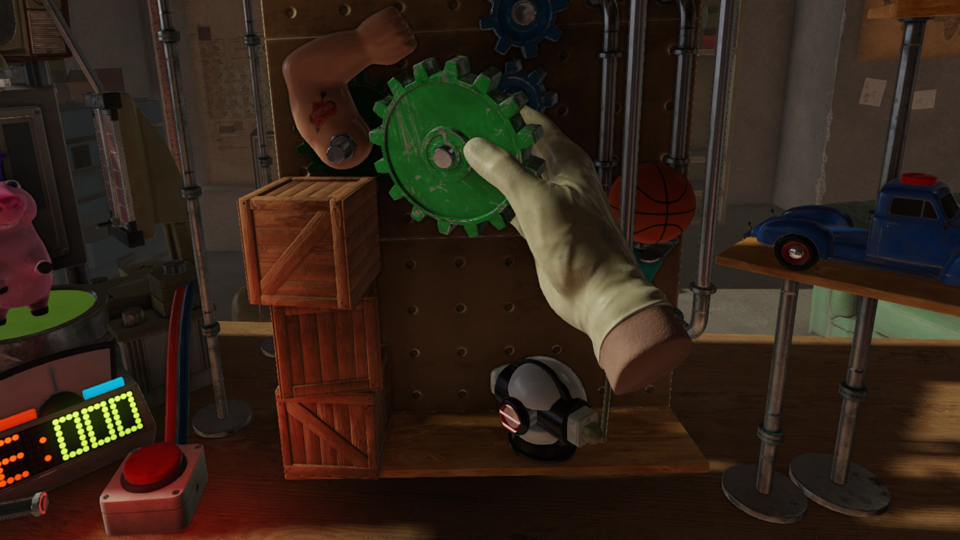 The star of this show is the machines and they are whacky messes or randomness, seemingly thrown together without thought save for the fact that when they work as they should; pushing cars into toasters, launching toast into a switch that powers a light bulb that grows a plant that tilts a  platform that knocks a ball down a chute to land on a switch that allows the entire machine to push a button on a another machine nearby.   You can start the machine at anytime to see where you’ll need to place the next item or see if what you placed works as it should’ve allowing for endless amounts of trial and error.  The campaign takes from your lab to a variety of locales that only get more and more fantastic though really just change up backgrounds more then anything else and remind you of where you are in the story as the focus in the game is always on the puzzle in front of you.  It’s great fun to watch these machines work as it can be very unclear just how they function until you see them in action.

Crazy Machines is entirely narrated by the professor as he describes and elaborates upon every situation that arises.  Each stage opens and closes with his thoughts and while he is competently voiced, tends to drone on way too long as he goes into too much redundant detail about, well, everything!  You can skip these monologues, but then you’ll miss out on the story forcing you to sit through his ramblings or skip them and not have much of a clue as to what is happening in the story.  It feels more geared towards a younger audience in this regard and when combined with the gameplay, does seem to target more casual gamers. 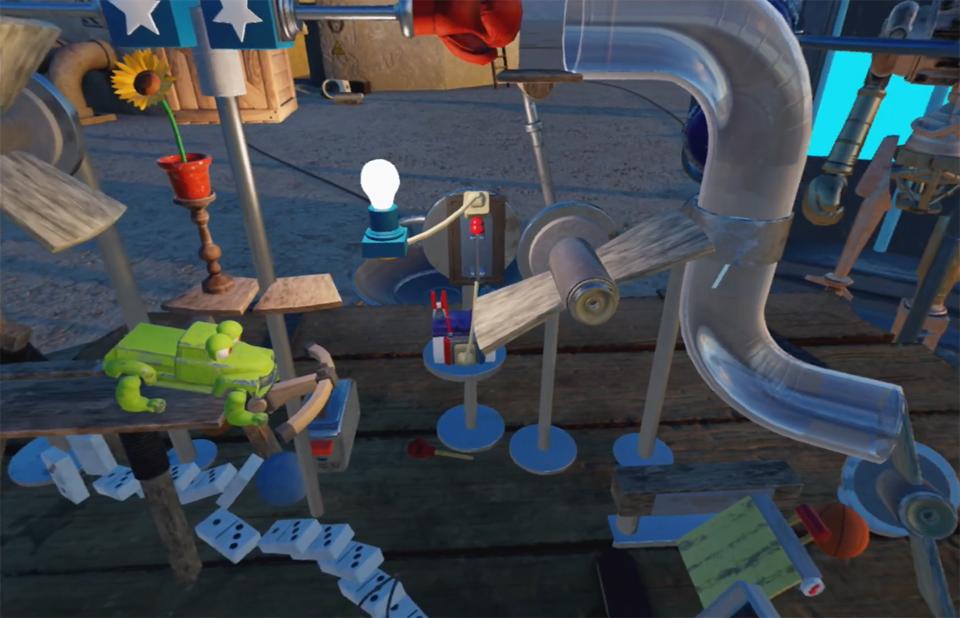 Every stage offers up new items to work with!

From the opening 1st moments when the mysterious package arrives and the professor starts rambling on, my annoyance at the game ebbed and flowed.  Bouts of fun were stopped in their tracks by the repetition and trial and error needed to solve puzzles.  Some of the later stages take a long time to get through and despite the limited number of tools and options at your disposal, you may have to run the contraption over and over until you get it right.  When I hit those more challenging stages, any enjoyment I was having was crushed by the redundancy of trial, error, replay and then repeating the whole process over and over again.  An option to fast forward the contraptions as they run is greatly needed as some levels can be very obtuse and vague as to what their solutions may be.  As new elements are introduced it can be very unclear as to how they are used which makes for some frustrating game designs compounded by the fact that you may given extra pieces you don’t need and more places to put them on the machine then required making for more confusion then fun.  The story is also very slow in it’s telling with each stage pushing the narrative along at a snail’s pace which just compounds the other issues I mentioned.  The challenge is severely lacking in the first few stages but becomes irritating in the later ones as it’s not the right kind of brain teasing challenge.  Instead of thinking about a solution I had to just swap pieces until I found the right one or used the robot helper as the trial and error process of every stage just got grating. 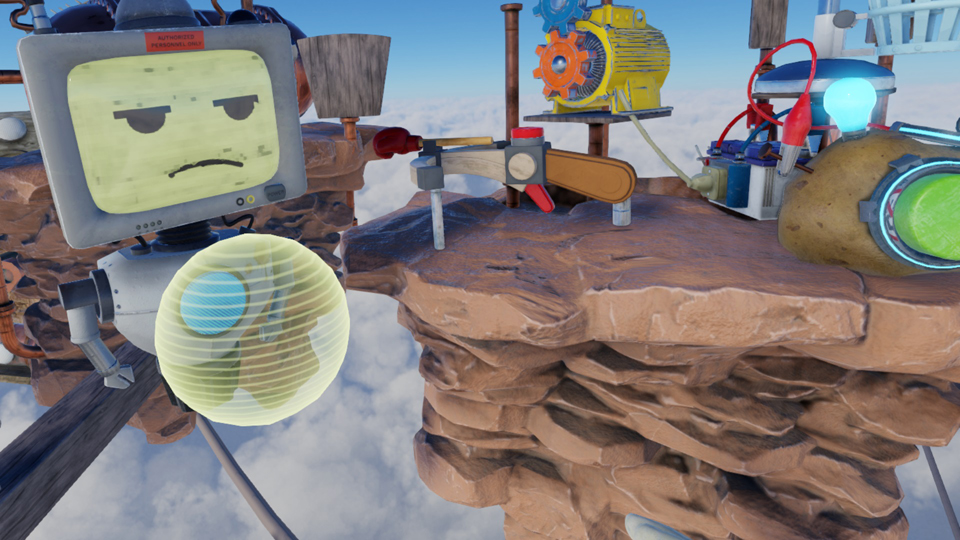 Your little robot helper can be a game saver at times!

Crazy Machines isn’t broken, but it just becomes so redundant that I could only play through a few stages at a time before needing a break.  Some stages do go a little further into the puzzle side of things requiring me to redirect laser paths and place switch mechanisms which offered more traditional brain teasing, but those elements were few and far between the monotony of placing pieces until I guessed right.  As I said the overall presentation and gameplay hints that this was developed for younger gamers and they will probably pull a little more enjoyment out of this I did.  As it stands now, Crazy Machines is a puzzler lacking the puzzle elements that make that genre challenging AND fun as instead we are left with a game that relies a little to heavily on obtuse solutions and forcing the player to watch the machines work over and over and over until you get it right.

What would I pay?  There are a lot of stages in here and when you do find a flow it’s great, but that never lasted more then a level or 2.  There is fun to be had here, but it’s heavily hampered by the crazy in these crazy machines.   £24.99 is a big ask for this as the fun I had playing this was countered by unnecessary frustrations.  Push that to half that asking price I’d be more forgiving of its shortcomings, but as it stands now, unless you are huge fan of Rube Goldberg machines, I don’t know how far you’ll get before you decide to move on to something else.

Perp Games provided The VR Grid with a press code for this title and, regardless of this review, we thank them for that!