Alvo has been out for the PSVR headset for around a year now and while it did have a slightly rocky launch, multiple patches and updates since that time have refined the game into the go-to fast-paced military shooter for that headset though admittedly, and not to take away from the game, there’s not a lot of competition on that platform.  On the Quest side of things, we have games like Pavlov Shack, Contractors & Onward all vying for your military multiplayer attention and with Alvo now in that mix, it’s time to truly see where it compares with some of these legendary titles and see if it can not only meet but even exceed the competition. 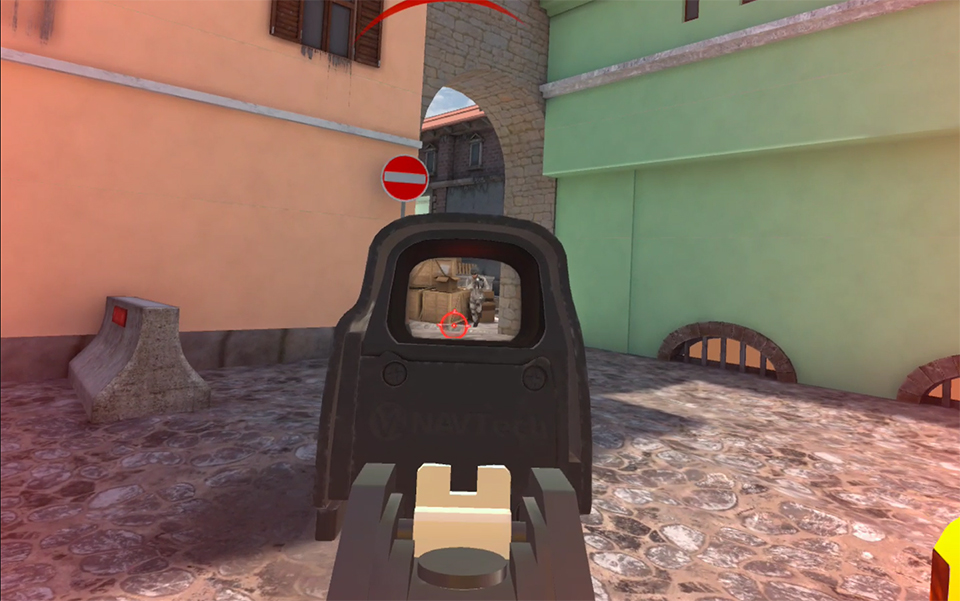 Shoot before they do…you know the drill.

Alvo currently offers up 4 separate game modes, Team Deathmatch. Search & Destroy, Deathmatch & Zombies with the 1st 2 breaking up the players into teams of 5.  Deathmatch removes the teams and turns you into an army of one as you face off against up to 9 other foes with any empty spots being populated by bots, though if more than 6 players join a match, all bots disappear and will only reappear if the player count drops below that number.   TDM is self explanatory with Search & Destroy mixing up the action by adding a little strategy as each team has different objectives and cannot be played with bots.  One team is tasked with defending multiple locations from the opposing side, who must successfully arm a bomb at any of those spots and prevent the defenders from disarming it before it goes off with the 1st team to claim 5 victories being the winner.  The kicker is you only have 1 life each round but if you die, you can still view the map via multiple spectator cams and talk to your allies about the enemies’ movements.  Recently added is ‘Zombies’ which can be played solo or with up to 3 other friends in either The Town or Monastery maps and puts you in horde style action against increasingly deadlier zombies that try to take you and your friends out and killing them rewards you money.  That cash can be spent on weapons and ammo scattered around the map or on upgrades for you and your gear allowing you to take less damage from certain enemy types, modify bullets to be more deadly or even just buying health and shields to keep you ready to go.  I’m not sure how many waves there are (I’ve heard 100 or more) and the furthest I got with a team of 4 was in the 30’s so it’ll take a fair bit of skill, or exploiting, to get to those later stages. After each multiplayer match is done, players are treated to a voting screen where you can choose the next map you want play on. 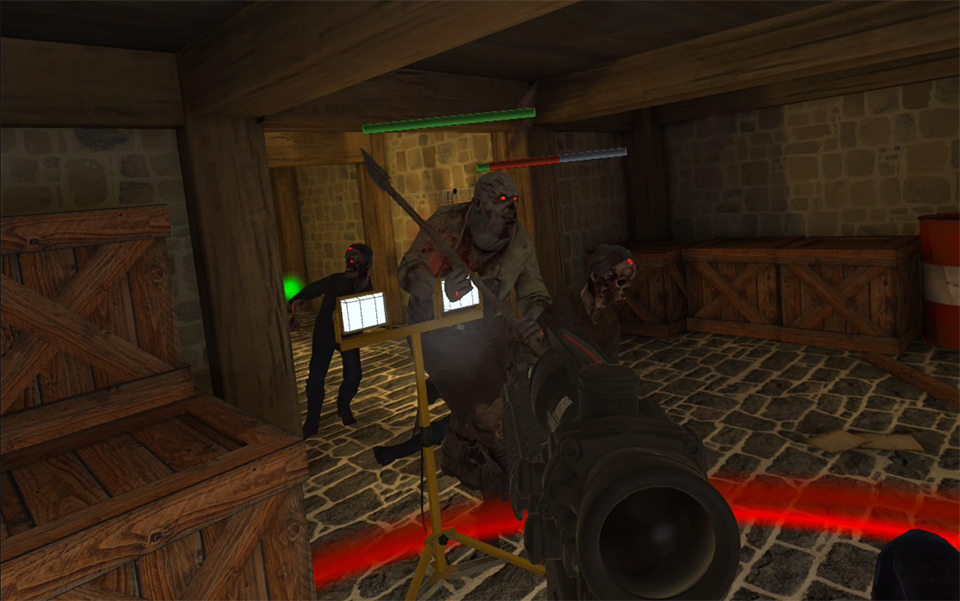 Zombies starts off easy, then it’s not!

Unlike the PSVR version, The Quest version allows for “proper” VR controls though the developers have chosen to offer a mix of control schemes which took me some time to get accustomed too.  Moving is standard for an FPS and with the right button or thumbstick press you can run, duck, go prone, slide and jump around the map but must be wary of your stamina as too much running, sliding or jumping will wear you down.  Included are a plethora of comfort options to accommodate those that need them (no teleportation) though some of mechanics like reloading & tossing grenades are a bit different as they hybridize manual and button press reloads.  For single weapon wielding, you need to let go with your off hand by pressing a button, reach to your chest where you can see the ammo, grab and it will appear in your hand and then bring that magazine back to the weapon.  Once your hand gets to the proper position, the game takes over and animates the motions of arming the weapon before giving you control once more.   Dual Wielded weapons reload much easier as all you need to do is aggressively flick the weapons down and up to trigger that reload animation.  Throwing grenades will take some time to get used to as you need to grab at the grenade on your chest with your off hand whereupon a throwing arc will appear that lets you accurately choose where you want the grenade to go.  Once you’re happy with its trajectory, you need to make a throwing motion to toss it. Avatar and load out options are available from a selection of male and female models with 4 different loadouts to tweak to your liking and can be changed upon death during a match.  Those loadouts include not just weapon, skin and attachment options but also your choice of 3 grenade types, perks & kill streak options which will need to be unlocked by leveling up and acquiring enough cash.  What this all boils down to is a fast-paced military shooter with a decent selection of options to customize your loadouts that requires a fair bit of game time to unlock, ensuring those that want the good stuff are going to have to grind to get it. 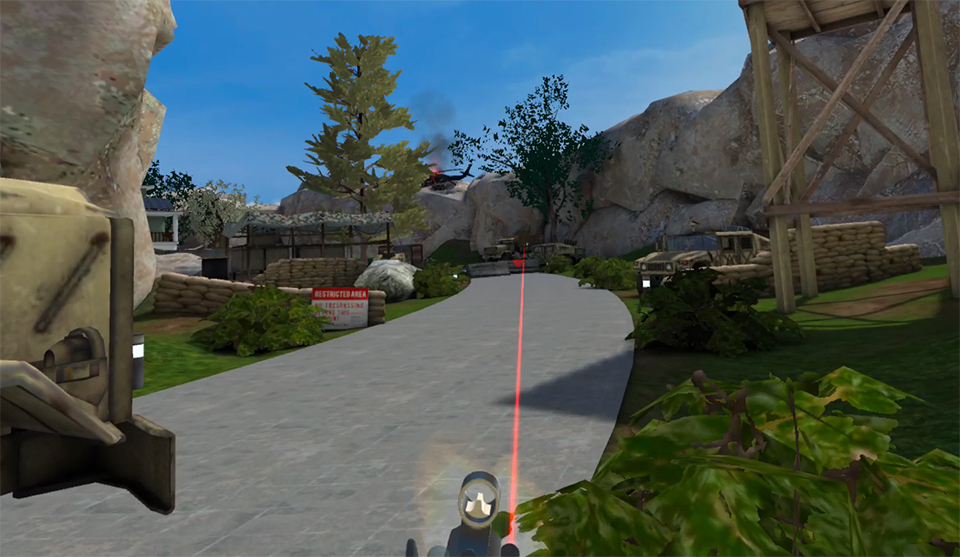 Lasers rock, but they give away your position!

There are currently 5 stages available (with a 6th on the way) some with day or night options which changes up the game a bit as it’s just easier to see your foes when the sun is high.  The scope of most of stages is actually very large and at first, I thought they were too big for just 10 people, but as it turns out, given just how fast you can cruise through a stage, it’s much less of an issue and allows for some ridiculously fun sniping action.  Adding to those map sizes is an impressive draw distance that let’s you see enemies all the way on the other end of a level.  You’ll play in a house area with underground tunnels, an industrial complex with some impressive verticality, city streets with lots off alleyways to sneak around, a close quarters mountain top monastery & inside a factory with the Desert Town Map, already available on PSVR, coming soon.  Each one offers its own unique feel with some pushing for more fast-paced action while others allow for a little more strategy, especially in the larger ones that are designed with Search & Destroy in mind.  The nighttime settings just look better largely because the environmental lighting hides the games shortcomings when it comes to texture and environment design.  By no means does the game look bad in daylight, but the lack of dynamic lighting, shadows and some simple textures belies the games smaller roots.  Character animations on the other hand look surprisingly good without much jank at all as do the weapons with an impressive inclusion being the scoped rifles that work flawlessly and are my favorite way to make a kill.  I stated that, for the PSVR, the visuals “get the job done” and considering they look damn near identical with the benefit of a higher resolution screen, I really can’t complain too much at all as it looks great considering the stand-alone HMD.

Sound design is a little more suspect with menu’s and loading screens having some intense music to get you in the combat mood with the actual stages playing in musical silence save for the final minute of a round. Weapons all sound alright but some of the 3D audio can be confusing and misleading, especially when kill streaks are called in with drones, dogs and artillery being really hard to pinpoint with the spatial audio being misleading at times. Playing deathmatch lets you chat with all your enemies while the team modes only allow you to talk to your allies with mics always hot unless you mute someone. For the most part the audio is good but could use some fine tuning. 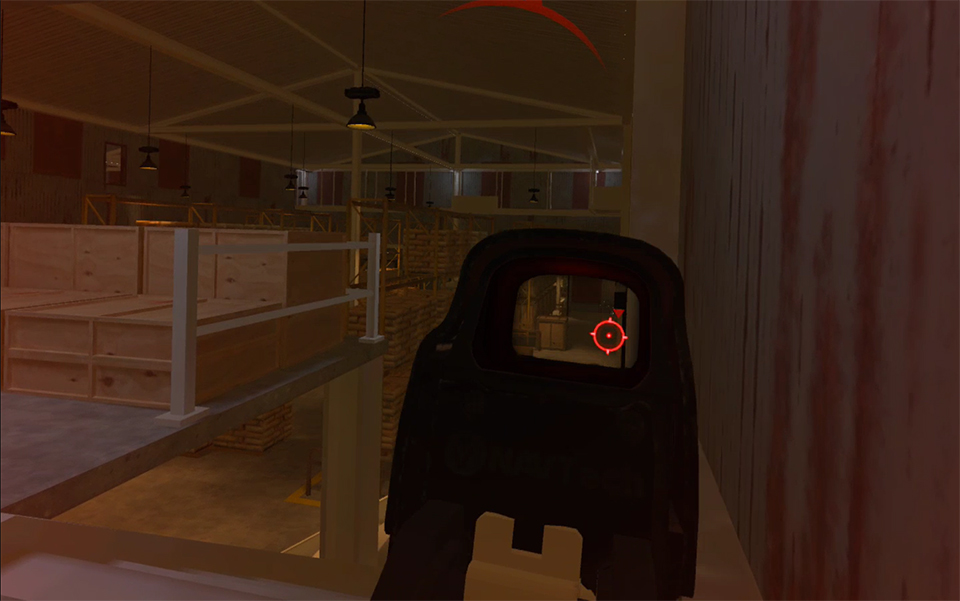 The maps are impressive in size!

I’ve enjoyed playing Alvo over the last year and the Quest version is not only nearly identical to the PSVR, but benefits from time as the game has seen substantial tweaking since that launch to make the overall experience just feel a little smoother plus it’s got a zombie’s mode now! I’m not gonna say it’s perfect as it could benefit from a few more perks, weapons, mods, modes and a proper in-game party system but given the current VR market, there’s plenty here to keep people entertained for awhile.  The progression system in here will take many hours to get through as each weapon requires ‘x’ number of kills with it to unlock the next attachment in combination with leveling up and having enough in-game currency to do so though weekly challenges are available that reward you with both of those.  Fans of other VR shooters will either dislike it for its not quite simulation gunplay or accept it as a fast-paced alternative to those more strategic titles out there and I am definitely in the latter category as hopping on for a quick round or 2 of anything is almost always a blast.  There is also the jank factor as issues could pop up from odd collisions with geometry, enemies seemingly able to shoot through some surfaces, jerky movement when climbing, sliding or crouching and other minor, more cosmetic issues, but for the most part, any issues I did encountered never ruined my game and the devs have shown a propensity to fix known issues so I do expect any major issues to be remedied in the coming months. 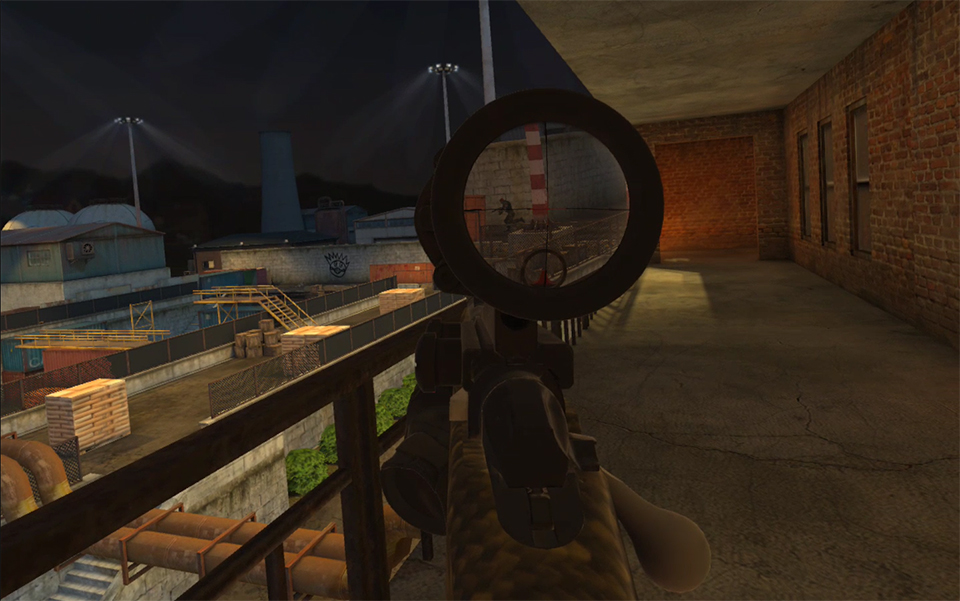 I love sniping in VR!

I like Alvo, plain and simple.  It delivers a multiplayer experience akin to other titles but does enough different to make it stand out from the rest.  I think it’ll come down to what you want/expect out of your military shooters.  If you are looking for something a little more “run-and-gun” than I think you’ll have a fantastic time!

What would I pay? At $25 US, I say it’s worth it.  I’ve been spending a lot more time in here than I expected to and am enjoying the grind to unlock new weapons, upgrades and killing friends and strangers alike or going through a round of zombies just to see how far we can get

Mardonpol provided The VR Grid with a press code for this title and, regardless of this review, we thank them for that!