Orcs, they are never shed in a good light (except in Warcraft) and for good reason.  They are vile disgusting creatures hell bent on humanity’s destruction by any means necessary and more often then not, it’s up to you to vanquish these dastardly foes.  Trickster VR tasks you with just that pitting you against the enemy horde in wave after wave of unrelenting action in dynamic environments that ensure you never play the same stage twice. 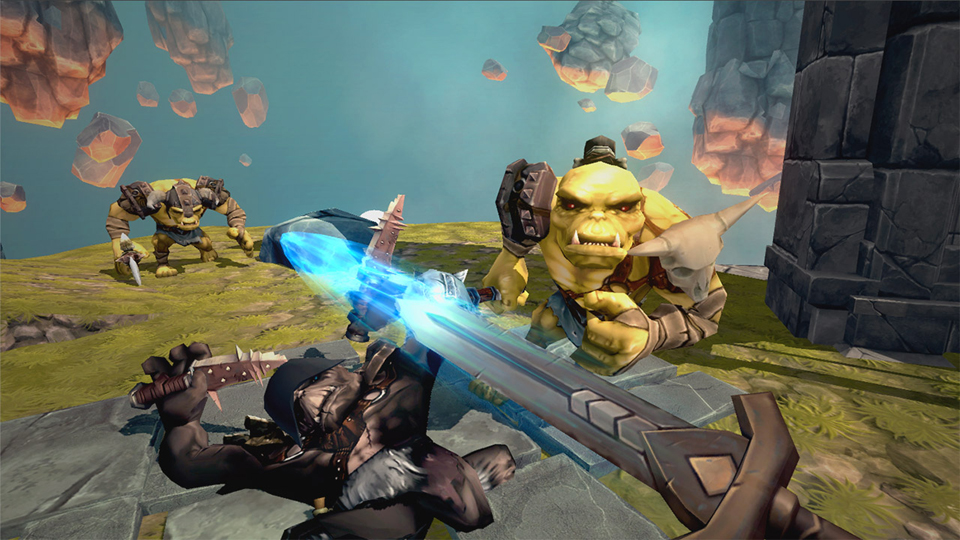 Fantasy action is the name of the game here and those familiar with Skyrim will feel very at home with the Motion controls.  Initially you armed with a sword and shield for melee and a bow and arrow for your ranged attack.  What makes this way more immersive than other brawlers of this type is that enemy armour matters meaning that if you hit their shoulder guard, helmet or whatever, your hits will do substantially less damage.  It’s really satisfying to strategically attack a lone orc, block his attacks with your shield then cut into his exposed flesh.  As you progress through the 35-stage campaign, everything only gets more difficult with new enemy types and objectives popping up to keep the action feeling somewhat fresh.  There is a loot system in place that allows you to buy upgrades in the form of increased modifiers to specific weapons and whether you fail or succeed in that mission, you are always acquiring loot, so progression is assured, regardless of how good you are or aren’t.  You also unlock an assortment of weapons from dual swords, a magic wand, frying pan and a few more options which do change the way you play the game as each does feel unique.  Comfort options are also available for those looking adjust the game to their liking and I turned them all off and went for free movement over teleportation. 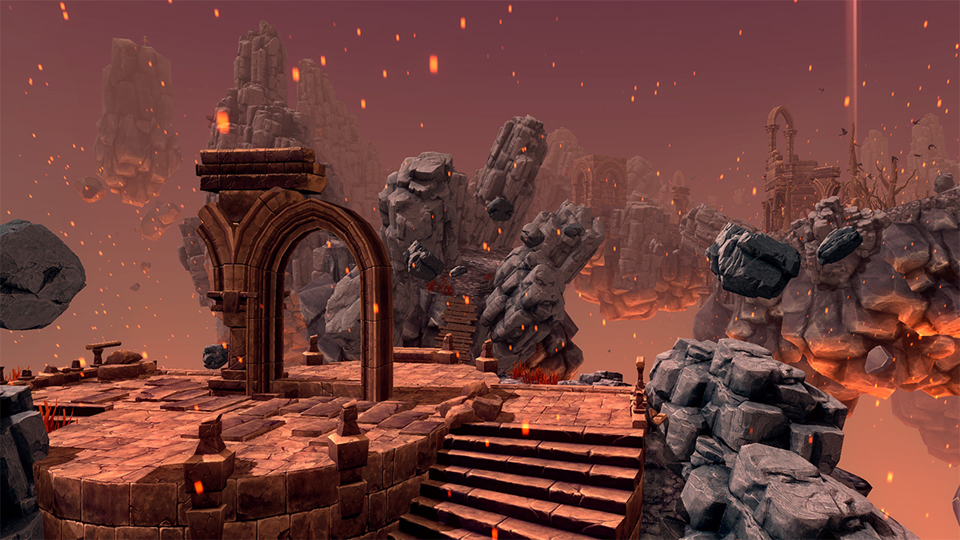 The levels in here are some of the most gorgeous I have seen in VR.

Trickster VR has a visual style that pops.  Orcs are very cartoonish and remind me of the Warhammer version of those creatures and come in a wide variety of forms ranging from simple armourless peons to shamans with glowing fists and huge bosses covered in armour.  While you will see a tonne of orcs and the same models over and over, the variety they come in makes each successive wave feel unique.  What is very impressive is the level design, which basically boils down to a series of floating islands stitched together to create a stage.  Some levels have you climbing up, or down or traversing huge bridges or old castle ruins and the draw distance in here makes the scale of these stages very impressive!  Blimps may show up, dropping off enemy troops and some levels feature unique enemies that you may only see a handful of times.  Enemies rag doll and react to your hits and blocks giving a nice sense of immersion rarely seen in games of this type though everyone has a health bar so don’t expect a 1 to 1 reaction to your attacks.  You do have a few lives available to you in the single player campaign should you fall in battle which allows you to hop right back into the action a few seconds after you have fainted. 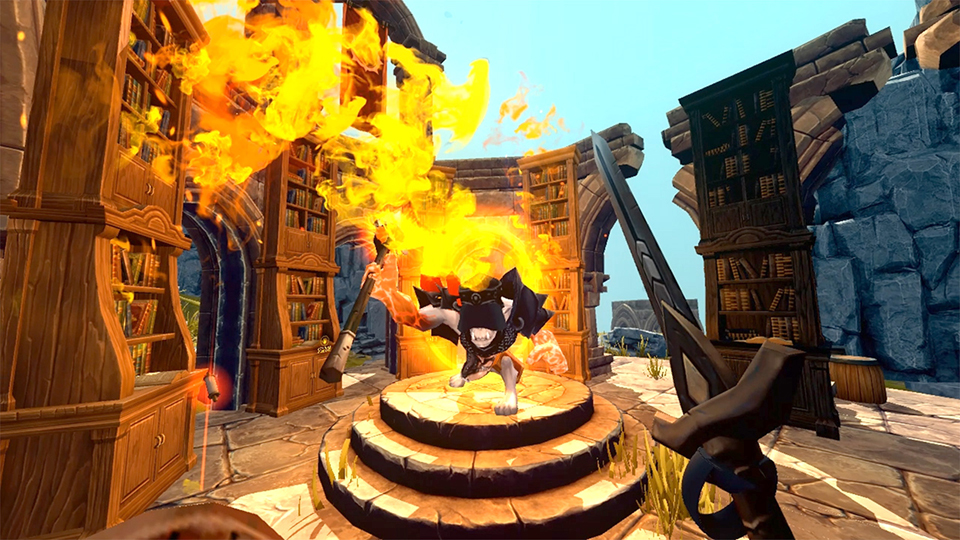 The bosses are no joke!

The sound is also great with the Orcs constantly spouting out lines of just how they are going to kill you as well as screaming, grunting and all manor of orcish behaviors.  The guardian, a crystal in your hub area, offers advice and commentary on your attacks though his quips are pretty generic at times stating that you need to do better after getting your butt kicked.  Still, when there is some extra treasure around, he lets you know it’s in the area so make sure you look about.  The music that plays reminded me a lot of the Elder Scrolls series and I mean that in a good way with the music having a fantasy feel that fits perfect with the action.

The single player campaign can get very challenging and fun, but it’s in the multiplayer where Trickster VR shines.  Finding 3 other players to combat the horde with is an absolute blast.  You can play with any of the loadouts you have unlocked and thanks to the mic communication, coordinated efforts can be made adding a nice layer of strategy.  Should you fall in battle, you can use one of your lives to revive yourself, or if your compatriots get to you fast enough, they can revive you adding a nice sense of comradery and teamwork. 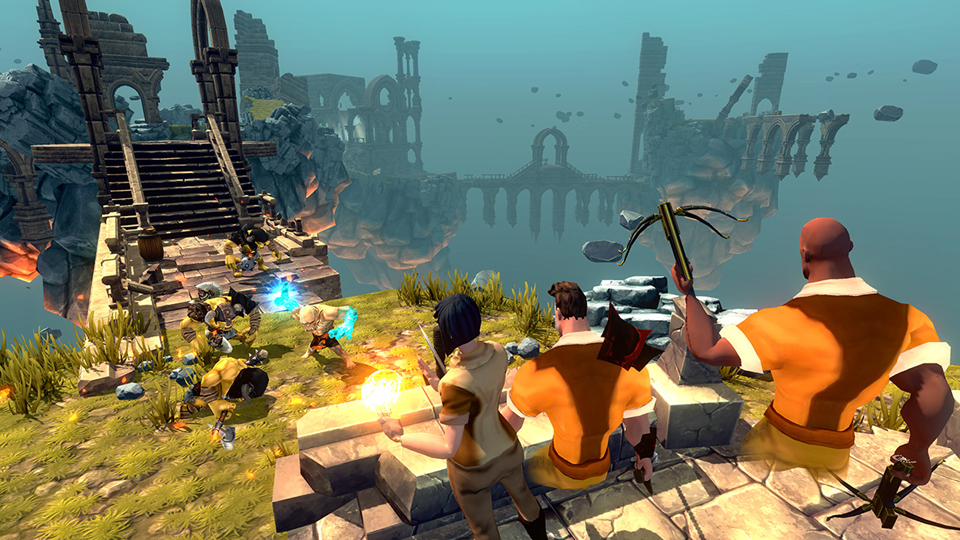 This is some of the most fun you can have with friends!

Trickster VR is a very competent wave battler with a fair bit of depth. The single player missions may start to feel the same, though the inclusion of some light objectives does mix up the action a tiny bit.  The co-op multiplayer adds a new level to this game and if this was online co-op only, I’d still say pick this up.  Getting surrounded turns into a bit of a waggle fest as you try and climb your way out of a dire situation, but the smaller battles feel great as you block and parry your opponents’ attacks followed by hitting their openings and weak spots.  Seeing your comrade being overwhelmend by the enemy only to hit them from behind and save the day is a rewarding feeling only available for the PC version of this game.  If you are looking for and a first-person fantasy brawler, Trickster VR for the PC headsets is an absolute blast best played with others.

What would I pay?  $13 for this is an absolute steal for the PC version.  The single player stuff is fun, but the multiplayer is what you are paying for and it’s worth every penny!