This a point and click adventure having you waking up with no memory of who you are (which doesn’t matter) and what you’re are doing in this bunker(which barely matters). Only requiring the Gear VR headset to navigate, you look at the floor to walk where you want and you tap to interact with whatever the game lets you interact with (your reticle changes to let you know what you can/can’t interact with) and that’s about it. 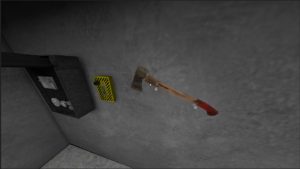 Look…stuff…I bet I can touch it.

Graphics are okay but in no way are anything to scream about.  Audio is…lacking? Not to say it’s not there, it’s just boring, your character will say something whenever you pick up or interact with the environment and it’s so deadpan you’d rather he didn’t say anything, except for the fact he gives you “clues” to help with an items’ use.  Puzzles are easy enough, only being stumped once, but I blame that more upon the game as I was allowed to progress past one puzzle without completing it all the way to the final task only for a countdown timer to start requiring me to input a code from the puzzle I didn’t solve.  Weak.

I completed this game in about 10 minutes so woo hoo for me I guess.  This game feels more like a demo, and honestly, if it was a demo, this would be a better experience.  However, this “full” game costs $2.99 which is a giant rip off.  It’s only $3 but with the slew of content both free and pay, this is a waste and not worth paying for.  I encountered 2 game breaking glitches in my playthroughs as well, which forced me to reset the game and start over.