Many people dream of flying and if you are one of those people, than Eagle Flight may just be the game of your dreams.  Currently available for prices ranging from $40 to $65, depending on your region, is the eagle “simulation” game that has you traversing a long abandoned France while completing a few single player and multiplayer objectives.  This is Ubisoft’s first big jump into VR so expectations have been very high.

I never bought into the hype of this game, but it was there, and from what I can tell I was justified in my thinking.  After some extensive loading times you are placed immediately into the game with an odd looking view.  It’s like a 1st person view of a tiny faerie on the back of an eagle, and no matter where you look though, you always get that same view.  It looks more like I’m wearing an eagle mask than actually being an eagle and while this fits well with the mechanics of the game, it just didn’t look right to me.  Before you lies the France of the future, abandoned by humans with nature taking it over once more (like the I am Legend movie).  The city looks great and has a pretty impressive draw distance.  Animals populate the plant covered city remains and everything looks really good…at first. 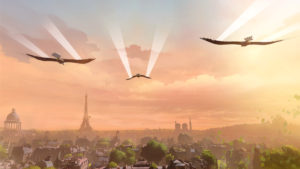 Good from afar, far from good!

Quickly apparent is the art style which looks cell shaded from far distances, but get closer and you’ll see that its just lack of detail.  The city map is massive and impressive, but I noticed that environments quickly repeated.  See that Chapel? There are probably 30 more like it. Even smaller details like holes in structures all use the same graphic.  Soaring through these streets at a high pace makes this moot as you will be so focused on dodging the next obstacle you wont have time to appreciate the world around you, but stop and take a breath and you’ll see what I’m talking about.  Everything here looks amazing from far away and its definitely the largest play area I’ve seen in VR.  Whether by choice or tech limitations though, up close it all loses detail and fidelity.

Your eagle makes eagle sounds, so they nailed that.  The main campaign is narrated by a solemn fellow who helps explain your next objective (he sounds like a Discovery Channel Narrator) before plunging you into the game.  Animals make animal sounds, and flying sounds like it should so the audio in no way hurts this game and does help immerse you in this world.   The audio does give you the impression that this world is full of life.

Visuals aren’t the only thing to repeat themselves in this game.  Gameplay is comprised of a few mission types recycled over and over in different sections of the city.  Fly through rings, timed speed runs through the city or defending/attacking other animals (crows, vultures and bats).  There are a tonne of missions and challenges here, but after you unlock your Eagle Powers, a shriek that acts like a gun blast and shield type thing, you have seen all this game has to offer.  Every mission has a 3-star rating and some will definitely require practice to master, but unless you’re a completionist or really care about leader boards, there is no reason to replay the missions as you will be performing those same actions soon enough.  It just gets old.  The missions themselves are fairly challenging, especially if you care about being the best, but fly slow and steady and you shouldn’t have any troubles advancing.

You will need a standard PS controller to play, though only for activating your speed, powers and navigating menus.  Where you look is where you fly, but to keep yourself centered, tilting your head performs sharp turns without having you turn your body in circles.  It works really well, except in tight locations such as subway tunnels and sewers where turns are just too sharp to navigate at full speed.  You just won’t want to turn your neck that fast.  Flying as fast as you can through the city is best way to get a thrill out of this game and it is exhilarating at first, but as I said, everything in here just wears out its welcome. 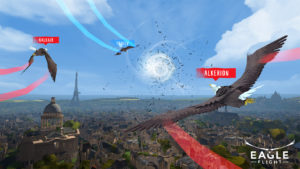 There is a multiplayer component here as well, but it’s nothing to shriek home about(see what I did  there?).  3 on 3 capture the flag is the only mode available and has you and your teammates picking up dead prey and returning to your nest while the enemy tries to do the same thing.  Wait times between matches were slow and I’m pretty sure it’s because of lack of interest, not a lot of people are playing this right now.  It’s a fine enough addition to the game, but with no way to communicate with your teammates and people quitting all the time, it gets old.

Eagle Flight could have been a fantastic game, but boredom will hit you long before you get to its end.  While flying is fun and the far away visuals are great, both get old and show their flaws quite quickly.  The developer may have included a tonne of missions and thus playtime, but as repetition sets in you’ll soon realize that this game is more like an extended demo than anything else.  The asking price for this game is just to high for what is offered when compared to other PSVR content.

What would I pay?  $20 would be the most I would pay for this game. With a limited muitiplayer and repetitive gameplay, there just isn’t enough to warrant anything higher.