This review encompasses all the available tables, not just the base content and has been updated to include all tables up to and including the Universal Studios DLC

Modern pinball games have been around since the 1970’s (and technically even way earlier than that) and have seen a lot of change as technology has advanced.  The port to consoles was inevitable and Zen Studios has been at the forefront of bringing these arcade machines to home TV’s.  The next logical step was virtual reality.  Pinball FX 2 VR brings us a virtual pinball arcade offering a unique way to play this tried and true genre. 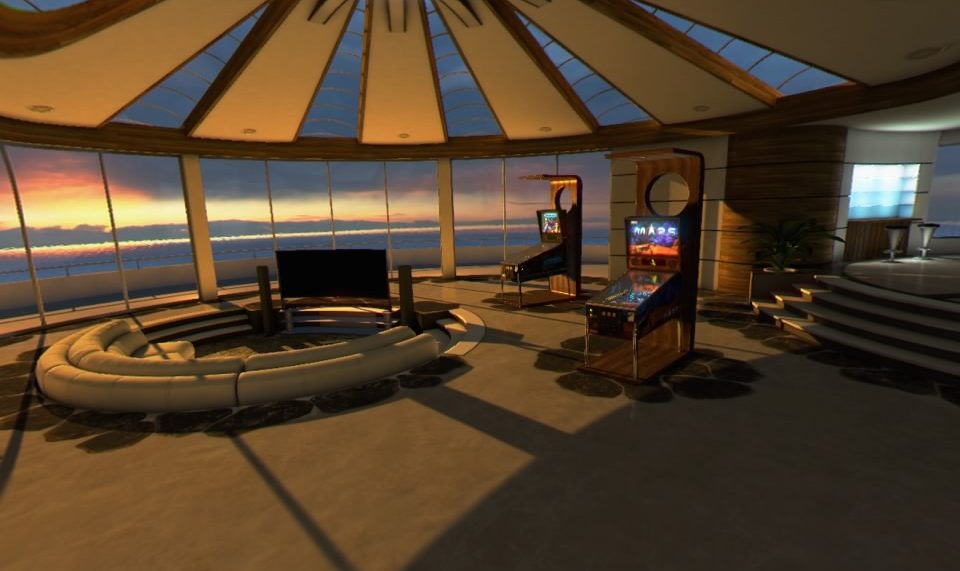 It’s too bad you can’t view more than 3 machines at a time…that space is begging to be filled.

Once the game loads up you are greeted with a very pleasant slightly futuristic, slightly retro living space and ahead of you lies the 3 machines you get with the initial purchase.  As of now a total of 12 machines are available through a few different bundles and individual purchases. Your Pinball abode has the main room and a leaderboards room, and are accessible by just looking at the area and pressing ‘X’.  Selecting the tables is done the same way and once in a front of a pinball table, triggers control your paddles and the left thumbstick can tilt the table, though messing with that too much could deactivate your paddles, costing you a ball.

All the machines available have a very different look and feel from one another with the notable standouts being the licenced tables, which aren’t included with the base game.  Whether it be The Walking Dead, Jaws, Back to The Future or ET it’s always nice to see some familiar pop-culture.  The rest of the tables are the standard fair of sci-fi, western, under water and so on all varying in their quality and appeal.  The machines themselves are all brightly lit with a bunch of paths, paddles and little animations sure to keep you entertained. Unfortunately, even with the purchase of more machines, only 3 are on display at one time so you don’t get to look at all your glorious cabinets at once. 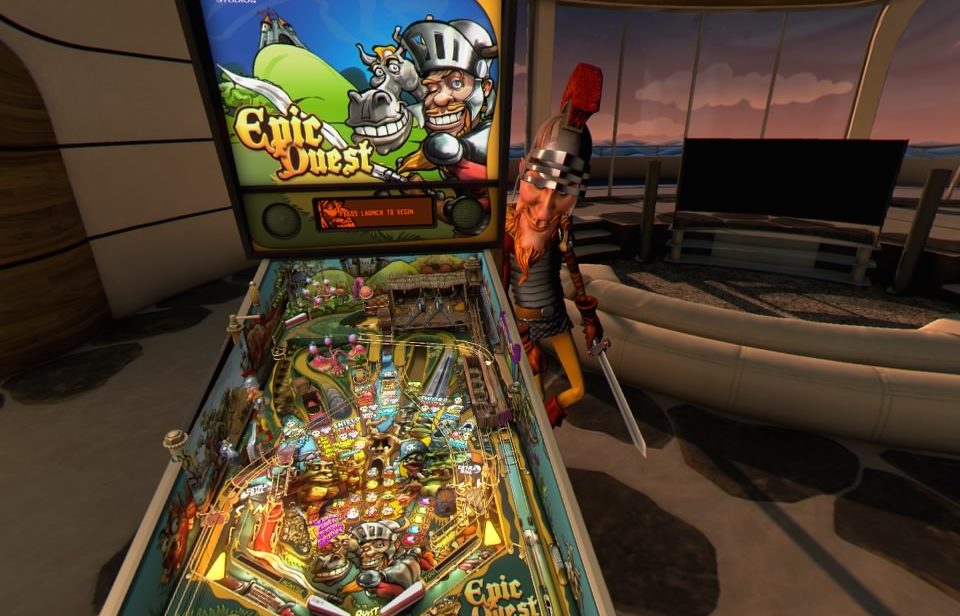 It’s nice to have an audience while you play

Sound also stands out as being of really high production value.  Every beep, gun shot, groan and any other effect is joy to listen too, along with the individual tracks for each machine.  The one exception to this is the licensed tables, which carry some generic music and not the classic music many of these titles are associated with and their absence is noticeable.

What separates the VR version from any other is the surrounding backgrounds.  Fully animated sharks swim around you, spider-like alien’s creep across your machine or E.T. spouts out little alien lines while he watches you play.  Along with many other table specific animations, these can be both a joy to watch and kind of a pain at the same time.  While they are amusing, they can also be distracting, especially the ones that move between you and the pinball machine.  An option to turn off background animations might have been a nice inclusion, especially for those that take their high scores seriously.  Still, you have never played pinball quite like this and for the most part the surrounding animations add to the experience. 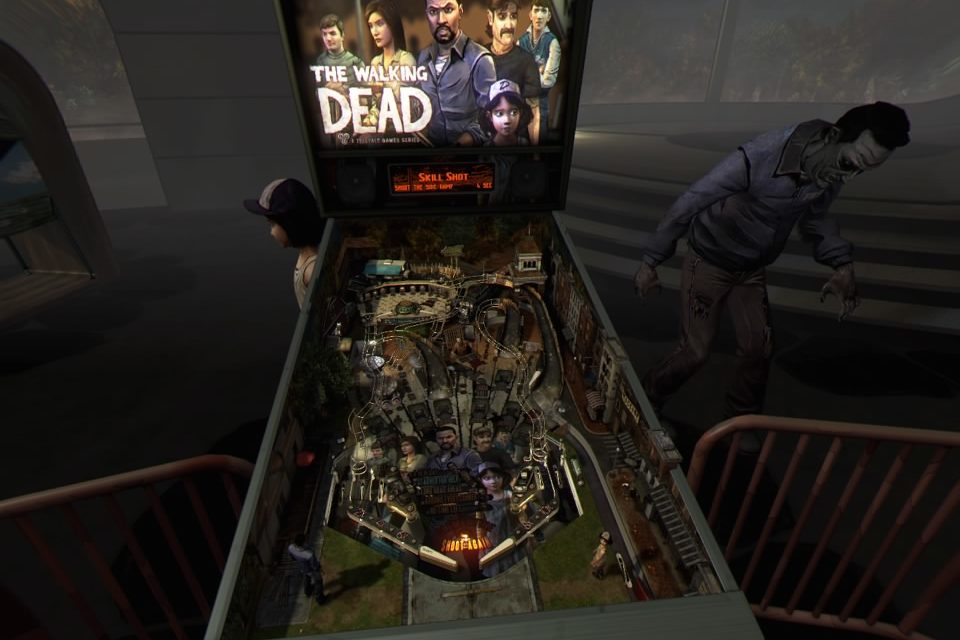 Leaderboards and your own personal best are the reason to keep playing and typical of any pinball machine is finding the quirks on each table to maximize your points.  Finding these little nuances may take time, but it’s worth it to get that next best score.  Leaderboards also track your Pro Score, Team Score and table stats ensuring that you will always be competing for that next scoreboard position.

Typical of VR’s shortcomings is that the further away something is, the more pixelated and diluted it appears.  That statement can be applied here as well as even the opposite end of the table starts to lose visual fidelity; not enough to detract from the game, but it is noticeable.  This is especially apparent when you lean in close to the table and objects become crystal clear and gorgeous but pulling back sees them quickly lose resolution.  This really isn’t the games fault but rather the shortcomings of current VR tech and the game overall looks and plays great.  The only other issue I had was body positioning.  The games default view has you standing in front of the machine, forcing you to look down a little and after a while you may start to get uncomfortable.  This can be easily remedied by re-calibrating your position high, then lowering and adjusting your body for a closer view of the table.  It’s easy enough to figure out after a few adjustments should the default position not be for you. 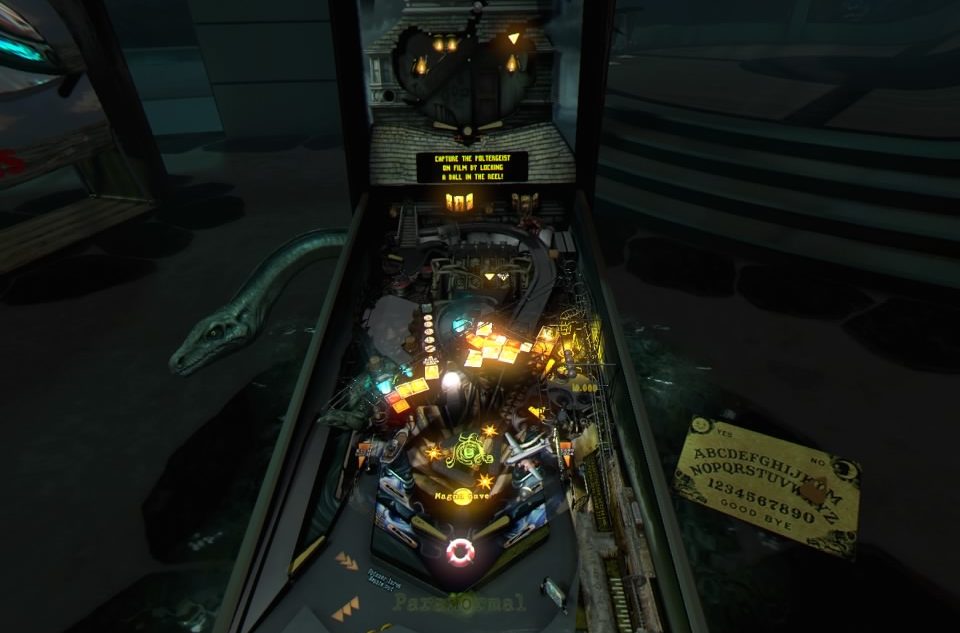 This might just be my favorite table…I love the layout!

I had a fair bit of fun with this game, and I’ve never been the biggest fan of pinball machines.  The stellar presentation offered here is the reason to play and minus the visuals that are a little to in-your-face, this is a pretty flawless experience.  It’s easy to get lost in a deep run and sink way more time into this game then you might think.

What would I pay: $15US for the 1st 3 machines is worth it. If you find yourself falling in love with this game, additional tables work out to be around $6 each which may seem a little steep when you add it all together (roughly $65 for all 12 tables) but like I said, it’s easy to get lost in any table for way longer then intended.

Zen Studios provided theVRgrid with a review copy of the game including all available DLC excluding the Universal Studios tables.