Onward is a first person military simulation available for the HTC Vive, currently for 25$. It’s a tactical multiplayer shooter and one of the most populated games in VR today.  That doesn’t mean it’s for everybody though as the realism driving this game may turn off more casual gamers.

Onward has very simple, traditional FPS mechanics; it’s 4 vs 4 multiplayer with an objective (kill, capture…).  Some level designs will remind you of Battlefield while others of Counter Strike, but gameplay style is from Insurgency; meaning everyone will die taking only 1 or 2 hits so tactical positioning and coordination are very important.  Most of the matches play out the same; the Volk always defend the objective and the Marsoc always attack.

To look at the game from conventional FPS perspective you will see that it changes from complex and tactical to simplistic and silly based on the level its running.  Playing as a team is imperative as most of the areas can be well defended from attacks and require a coordinated strategy; using your team and effective communication will allow you to move behind enemy lines unpredictably and ensure victory. 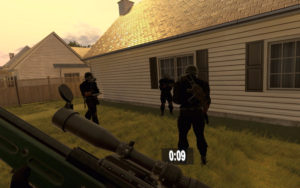 This is your band of brothers so stay close and coordinate!

Combat is the crown jewel of the game.  The Vive controller’s incredible accuracy and tracking makes the aiming system one of the most complex and challenging control schemes currently available. Stabilizing your hand becomes a priority, not panicking during fire fights is a must.  You may even have to hold your breath to stabilize your shot with sniper rifle.  The challenge of the game is train your actual body to be superior at quick aiming, reloading your gun, tactical thinking and sometimes rushing across your room for that lifesaving knife attack.  How you take damage is also relatively unique. If you’re shot in a non-vital body part, you will fall, but still be able to communicate with your team; point out enemy positions or beg to be revived. You can bleed out after you have been shot so staying close to your team mates may be your best chance at long term survival as they may be able to heal you with a syringe.

Communication is encouraged, but is not without its own risks. The proximity mic has a very impressive design as everything you say in your microphone is heard by players around you be it friend or foe.  Your other form of communication is the radio on your left shoulder and is used for long range communication with your teammates. Everything you say or any noise you make can be used against you by nearby enemies so be careful not to breathe too loud, it could give you away.  Silence may be golden, but there is satisfaction to be taken from announcing your presence right before you knife your opponent in the back.

Customization is important part of the game as primary weapons can be modified to include different sights and scopes. All these weapons can be accessed through the picking of different classes. Also available are two tactical gadget slots which can be filled with bullet proof shield, multiple grenade types, night vision goggles or extra set of syringes.

Room scale tracking will help you, see in the corner without exposing your body, quickly crouching and hiding from incoming bullets become second nature after couple of rounds, I’ve seen many people laying on their chest and camping at specific location.  It should be mentioned that locomotion is handled beautifully in this game, fully immersing you in the world around you with great navigation mechanics, no teleportation here, just the touch pad and your 2 feet! 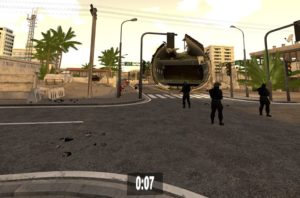 Some environments look better than others, but they all look like they belong in game made a long time ago.

Graphics aren’t impressive, not terrible, just dated. Resolution is very low and it can occasionally be very hard to see your target from far distances.  Counter to that are the collision mechanics, which are amazing.  Sound isn’t anything special but communication with microphone mechanics takes the gold. I did have issues with the tick rate with many occurrences like taking cover only to get shot because the servers hadn’t registered I had taken cover.

Onward is most populated game on VR today and for good reason.  It has a very talented young developer and even though new added levels seem lacklustre and poorly designed, the game, overall, is still one of the best experience you can get on VR today.